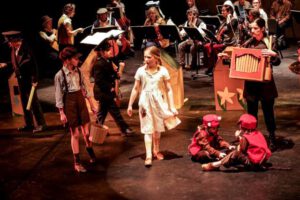 The half-hour children’s opera Brundibár, at the Sir James Dunn Theatre this weekend, is like an adorable school play.

However, this delightful piece performed by talented young actors and local classical musicians, was written in 1938 and performed 55 times by children at the Theresienstadt concentration camp.

As opening speaker Lindsay Macumber says, Brundibár was an expression of resistance against the Nazi regime and a solace through art for the camp’s children, most of whom did not survive.

Brundibár was written to be performed by children by Hans Krása with lyrics by Adolf Hoffmeister in Prague in 1938. Its premiere was in German-occupied Prague at the Jewish orphanage before the mass deportation of Jews began in 1942 to Theresienstadt. Krása worked from a smuggled copy to reconstruct the music for instruments available at the camp.

Director Tessa Mendel, artistic director of Halifax Theatre for Young People, reminds her audience of the harsh reality of the concentration camp with a forbidding background wall with barbed wire.

However, the foreground is a wonderful, childlike set of cardboard-box houses, some with lit windows, others with paintings of flowers. Katrin Whitehead based her design on drawings made by children at Theresienstadt, many depicting their former homes.

To stage right are musicians led by music director Eszter Horvath, and including Symphony Nova Scotia players who perform a score that is like liquid sunshine.

Brundibár is a fanciful tale of good triumphing over evil as a brother and sister are desperate to get milk for their mother, who is sick with the flu.

Too poor to buy the milk, they sing for spare change but are drowned out by the nasty organ-grinder Brundibár, played by adult actress Rachel Hastings, accompanied by the cutest five-year-old, gamboling monkeys you’d ever want to see.

Forest animals, including a wonderful, fluttering sparrow, come up with a plan to get the village’s children to support and save the brother and sister. The song about fighting the cruel dictator is wonderful and this cast’s performance of it heightens one’s awareness of history.

The energy and story are so positive and transporting that the knowledge of the real history makes for a moving, sobering experience for older viewers.

Macumber reminds us that we are again in a time of rising anti-Semitism, along with Islamophobia and racism, and we must resist.

This is the true story of what happened, according to the press release. The opera “was performed 55 times in the camp, including a production for the Red Cross, who were duped by the Nazis into believing Theresienstadt was a model institution where prisoners were well treated. In reality, all of the children, the composer, director and musicians were sent to Auschwitz for extermination following the final performance. Of the 15,000 children interned in Theresienstadt, only just over 100 survived the war.”

Brundibár – four years in the making with a large team of community and theatre members – is on today, 7 p.m., and Sunday, 2 p.m. Tickets are $20 regular and $10 for students through Ticket Halifax by clicking here:
https://www.tickethalifax.com/events/94107401/brundibr-a-childrens-opera.
Recommended for ages 8 and up, younger children will enjoy the show and may skip the 15-minute talk if parents wish.