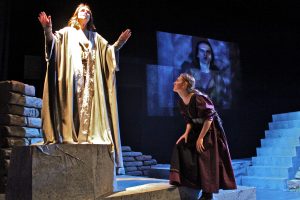 Merlin engrosses and endures
by Kate Watson
The Coast

Halifax Theatre for Young People conjures a winner
As someone who was enraptured by Arthurian legends as a child, I think it’s wonderful that the Halifax Theatre for Young People is staging Paul Ledoux’s Merlin. What a great opportunity to turn kids on to an engrossing, enduring story. This is an action-packed play filled with sword fights and magic tricks that will appeal to a younger audience. The complex political machinations and the exploration of the role of women also provide food for thought for teens and adults. The story is told in a non-linear fashion with many flashbacks and visions, but actor Gordon Patrick White does a fine job of delineating the young, insecure Merlin and Merlin as a mature sorcerer who carries the weight of the world on his
shoulders.

Halifax Theatre for Young People pulls the rabbit out of the hat again with a 90-minute historical drama full of intrigue and conflict.

Last spring the city’s professional youth theatre company brought the 19th-century Nova Scotia tale of the SS Atlantic to life. This spring it goes back in time to the early Middle Ages in Halifax-born playwright Paul Ledoux’s Merlin, the story of the famous wizard up to the point of Arthur pulling the sword out of the stone.

This Merlin, subtly and skillfully incarnated by Gordon White, is not the mighty, wizened, white-haired magician. This a younger, troubled man, desperate to bring peace to his war-torn country through a new and just king.

As the background to the more famous and familiar legend of the Knights of the Round Table, this is a compelling epic tale of youth, love, ambition, treachery and machination or magic.

When Merlin has visions of the future and works to realize them, how much of what happens is preordained and how much is the result of free will and his own actions?
“It’s both,” snapped my daughter, 10. Clearly, she was bored by the question but certainly not by the play.

Directed by Tessa Mendel with a top-notch cast, Merlin moves swiftly through time and place from the reign of Merlin’s grandfather Vortigern to King Uther’s renewed attempt to repel the Saxons when his son, Arthur, and his daughter, Morgana, are both teenagers.

Merlin is a vulnerable, anxious man who fears what his powerful magic can do. As he is thrust out of seclusion to accompany Arthur and Kay to King Uther’s armed camp, he looks back into his violent past.

In the beginning, Merlin was a stammering, weak boy adored by his mother (Karen Bassett) and despised by his grandfather Vortigern’s young Saxon wife Rowena. She knows that unless she has a son, Merlin is the heir to the throne. Suddenly the Saxons start a war that puts Merlin and Rowena on the run until she cosies up to King Uther and Merlin goes off with the Duke of Cornwall.

Leanna Todd is a deliciously rotten Rowena, a totally duplicitous, conniving person who uses her beauty, intelligence and limited magical powers to manipulate the men around her. The stage crackles with her intensity, and her motivation is easily understood given the fact she is a woman scrambling for power for herself and her child.

That child, Morgana, is perfectly played by the red-headed Els Bullock, a Dalhousie theatre student. Morgana journeys in this play from a merry, confident young girl who can wield a sword better than any young soldier into a frantic young woman about to lose her dream to be queen, a dream fuelled by her appalling mother and squashed by her previously adoring father.

Whether or not Arthur wants to be king ‘ and Truro actor Wayne Burns plays him as a confused, earnest and decent young man ‘ Merlin insists.

Two strong local actors play the aging kings with a surprising depth and humanity, given their short scenes. Lee J. Campbell, fresh from The Road to Mesa on Neptune’s Studio stage, is the strong-willed Vortigern, and John Dartt is the flawed and failing Uther. Veteran actor John Beale brings three different types of men to life in smaller roles.

The play is staged on set designer Bryan Kenney’s spare and effective structure of grey platforms and rocks with magical and moody effects of lights by Mike Mader and sound by Terry Pulliam. Jennifer Coe’s earthy period-style costumes place the viewer firmly in the hardscrabble times.

Tessa Mendel directs for a wonderful clarity. Kids can connect easily to the lively young characters, including Drew O’Hara as Kay, as well as all the sword fighting, mystery and mayhem. Adults relate to the more seasoned, serious characters, lots of twists and turns and some philosophical questions about the nature of life.

Merlin runs at the Bella Rose Arts Centre, Halifax West High School, Wednesday through Saturday, 7:30 p.m., with a closing matinee Sunday, 2 p.m. Tickets are $15, $10 for children or students and $40 for family of four. For tickets call 457-3239 or go online to http://www.bellroseartscentre.com/.
(ebarnard@herald.ca)