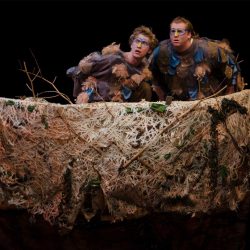 Many people dream of flying, but if you see Halifax Theatre For Young People’s Two in the Coop, you’ll want to climb into the nest. The 40-minute show that tells the tale of two young birds exploring their exciting, and sometimes frightening, world played Friday morning and repeats on Sunday at 4 p.m. at Alderney Landing Theatre in Dartmouth as part of Stages Theatre Festival, running in conjunction with the Magnetic North Theatre Festival.

Brad, who hatched first and is therefore older, bosses around the enthusiastic, optimistic Pete. He proudly says he’s nearly a bird, while Pete is merely a hatchling. Brad is more cautious and he’s protective of his younger brother, both physically and emotionally, trying to shield Pete from the fact that snakes and hawks that inhabit the jungle are predators and might eat them.

Their relationship, with the competition and familiar sibling fights, is delightful and symbiotic, proving that together they are stronger than one. Their love is palpable.

The set, designed by Garrett Barker, and the costumes by Emlyn Murray, are fantastic. The giant nest, a circle of sticks and greenery, which the birds stick their heads through, or perch on to view their world and watch out for their mother, elicits gasps. And the feather-covered costumes in beiges, with a touch of blue, are whimsical and realistic at the same time.

Both Lute and Olsen are believable as birds, occasionally squawking, flapping and munching on worms. Olsen tenderly tucking Lute under his wing is a particularly sweet moment.

Two in the Coop occasionally drags, but is ultimately a touching and heartwarming piece of theatre.